It’s over, Huawei has officially pulled the drape out of their latest flagship — Mate 9 at an event held in Munich, Germany. Featuring similar design language of past Mate devices the new Mate 9 from Huawei brings considerable upgrades and changes, all in all with a powerful new Kirin 960 chipset and a premium metal build. Let’s dive deeper into the hardware of the new Huawei Mate 9.

The Huawei Mate 9 features a 5.9-inch Full-HD display with a pixel density of 373ppi and a 2.5D curved glass complementing its huge display. The handset comes with some small but handy feature like a blue light filter, which is a proven software feature to protect your eyes from harmful lights during low lighting condition.

Underneath, the phone is powered by Huawei’s in-house and the new Kirin 960 chipset, which is first on the list to be coupled up with ARM Cortex-A73 architecture, accompanied by the latest 8 core Mali-G71 MP8 GPU and i6 co-processor. As stated by Huawei the new CPU of the Mate 9 outscores each and every opponent on the market including the A10 Fusion chip seen on iPhone 7, as well as the Snapdragon 821 chipset which is integrated on Google Pixel smartphone, while the GPU is claimed to be 180% faster than the predecessors. 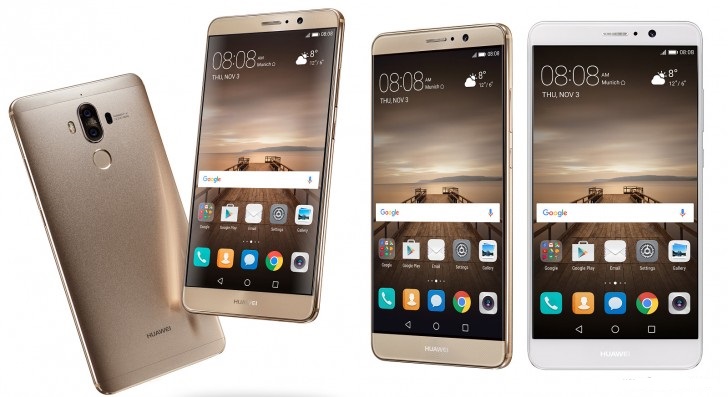 In case you’re wondering, the new Kirin 960 chipset found on the Mate 9 supports Google Daydream, making it a VR friendly phone. Huawei has promised that the new flagship will provide immersive VR experience. Alongside the powerful CPU and GPU, the Huawei Mate 9 is backed up with 4GB of RAM and 64GB of internal storage expandable through a microSD card slot.

The Mate 9 comes with Android 7.0 Nougat on top of the optimized EMUI 5.0, which as claimed is guaranteed to be 50% more responsive, and will make use of its GPU by further 20%. Most of the Android users witness some lag after their handset age out, however, Huawei states that the use of iAware intelligence monitor system will allocate required resources as well as provide additional resources, making the new Mate 9 age like a wine. 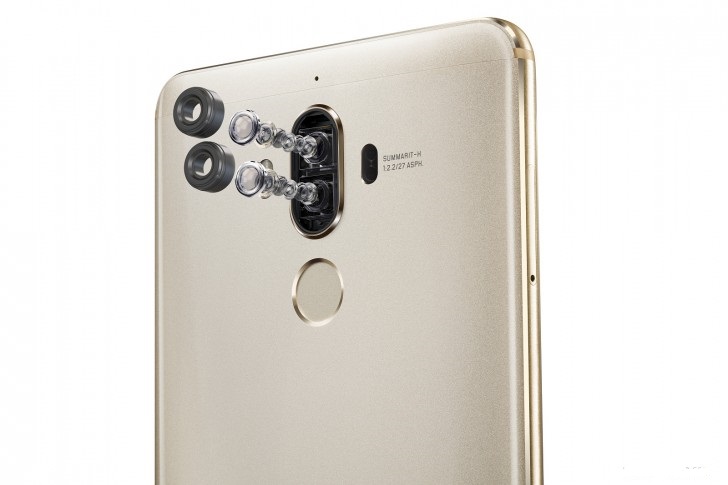 As for the camera, the Huawei Mate 9 comes with a 2nd gen dual Leica lens. The camera module is similar to that of Huawei P9 and P9 Plus. At the back, the handset boasts 12MP RGB sensor paired with a 20MP monochrome sensor with f/2.2 lens, capable of shooting 4K videos, which is first of its kind in Huawei’s flagships. There’s also a plethora of new features including a laser auto-focus, contrast detection, and Optical Image Stabilization(for RGB sensor only). The dual lens of Huawei Mate 9 opens a wide range of possibilities including a wide aperture effect, and a potential to refocus the image after capturing it — giving it a bokeh effect. Huawei says that the dual lens will offer a Hybrid Zoom function, allowing you to capture sharp and vibrant images with max zoom.

Other noticeable feature of Mate 9 includes a fingerprint scanner on the back with gesture support, USB Type-C port, and Category 12 LTE support. The whole phone drags the power from a non-removable 4,000mAh battery with Huawei’s SuperCharge support, which is first of its kind in the company’s history. The 5A charger in the box basically allows you to charge the phone nearly 4x faster than the iPhone 7 Plus.

Porsche — Huawei’s new partner will be combining to bring a new limited edition Huawei Mate 9 which is believed to carry a 6GB RAM,256GB of onboard storage, and a QHD display. The new Huawei Mate 9 and the Porsche edition will carry a price tag of €699 and €1395 respectively and will be available in various color options including Black, Ceramic White, Space Gray, Champagne Gold, Moonlight Silver and Mocha Brown.