Samsung Galaxy A52 and A72 official in Nepal

Samsung is extending its A-series lineup in Nepal today with the all-new Galaxy A52 and A72, both bringing all-round features for a competitive price.

Although the Galaxy A52 has two variants — one with 4G and the other with 5G — only the 4G model is available in Nepal. The Galaxy A72, on the other hand, has only 4G variant.

Let’s take a look at what both of these phones have to offer and their price in Nepal.

Out of the two, the Samsung Galaxy A52 comes with a smaller 6.5-inch screen and a battery that can last you a day. 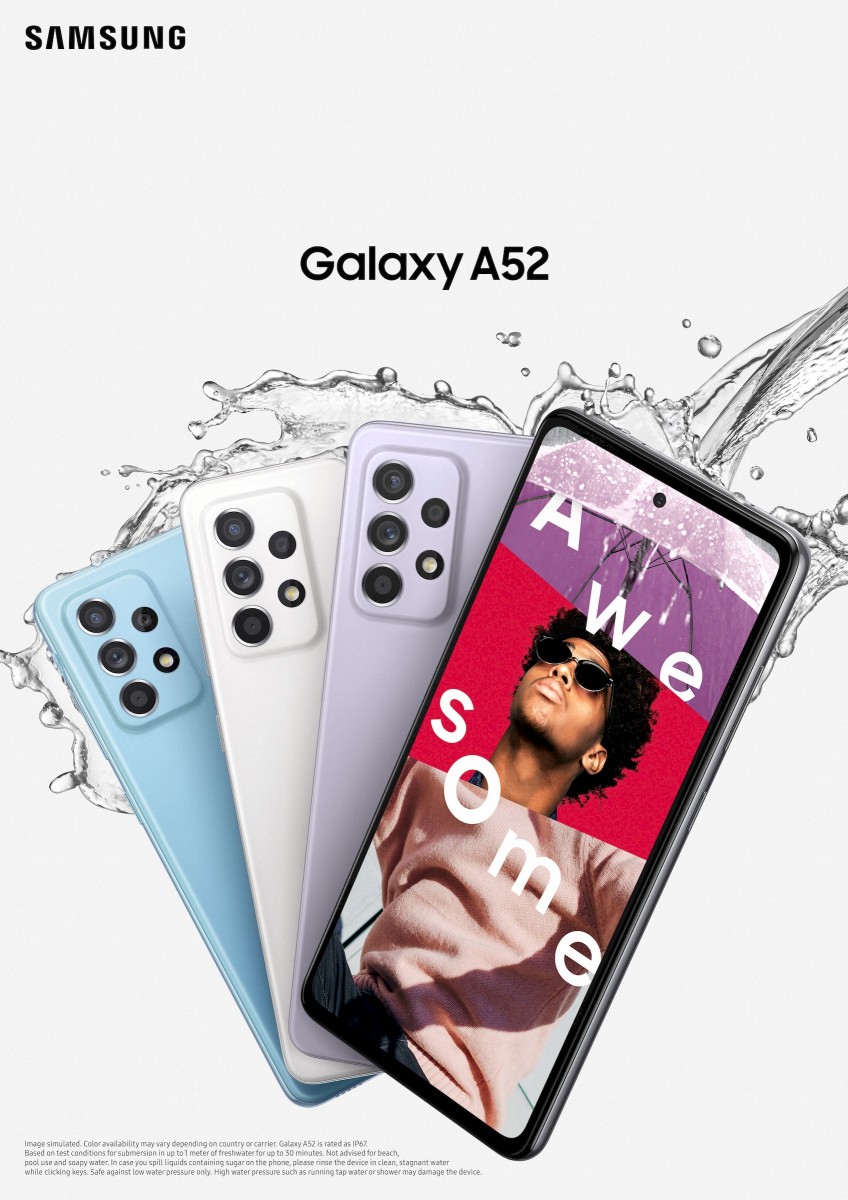 There’s a layer of Gorilla Glass 5 for protection and an IP67 rating for dust and water resistance.

The crown jewel of the phone is its camera, from which the main one is a 64MP sensor with an f/1.8 lens OIS and Tetra-binning tech. The tech is Samsung’s name for Quad Bayer, which combines four 0.8µm pixels into one. This means the phone’s default mode outputs 16MP binned photos but there’s an option to take full 64MP images as well.

The main camera is capable of shooting 4K videos at 30 fps. Right by the main sensor is a 12MP ultrawide shooter with 123-degree FoV and f/2.2 aperture with a fixed focus. Finishing off, we have a two 5MP camera for macro and depth help. Selfies are taken care of by a 32MP shooter at the front. 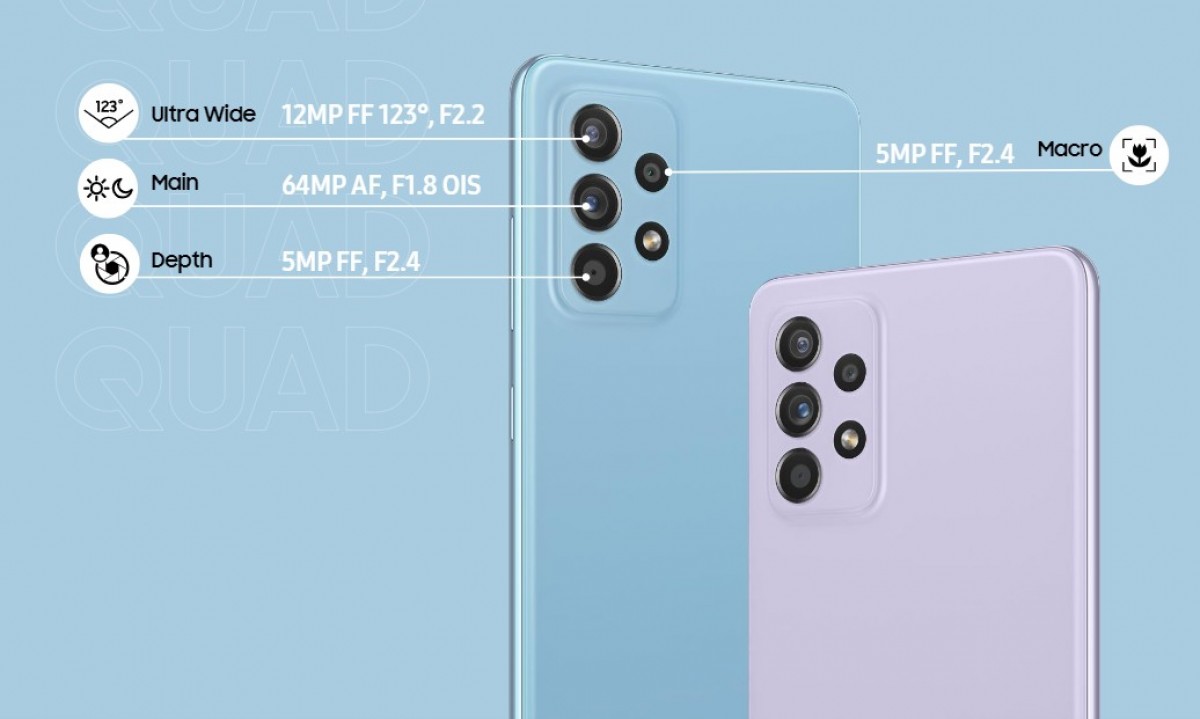 Under the hood, there’s Snapdragon 720G chipset for the 4G model, while the 5G one rocks a Snapdragon 750G SoC. Although both are based on 8nm tech, the 750G has an edge over the 720G in terms of CPU cores and GPU, plus there’s support for a 120Hz refresh rate.

The 4G model has 4GB of RAM as its base option but can go up to 6GB/8GB. On the other hand, the 5G one jumps right off to the 6GB RAM as its base variant and you can choose 8GB RAM as well. Nonetheless, the storage option is limited to either 128GB or 256GB on both models.

Moving on to the Samsung Galaxy A72, it brings a slightly bigger 6.7-inch display and a 5,000mAh battery to start it.

For now, the phone doesn’t get any 5G variant, thus the same Snapdragon 720G chipset is present inside.

This also means the refresh rate is limited to 90Hz only, but it’s a Super AMOLED panel with 800 nits of high brightness. The phone gets an in-display fingerprint scanner though, which is missing on the A52.

Another upgrade on the Galaxy A72 is in terms of the camera, at least to some extent. Instead of the depth sensor, there’s a 3x telephoto lens with an 8MP sensor, f/2.4 aperture, and OIS. Barring that you get a similar configuration to the A52 — 64MP main one, 12MP ultrawide, and 5MP macro.

The IP67 rating is still present on this phone, so are the 3.5mm headphone jack and Dolby Atmos stereo speakers. 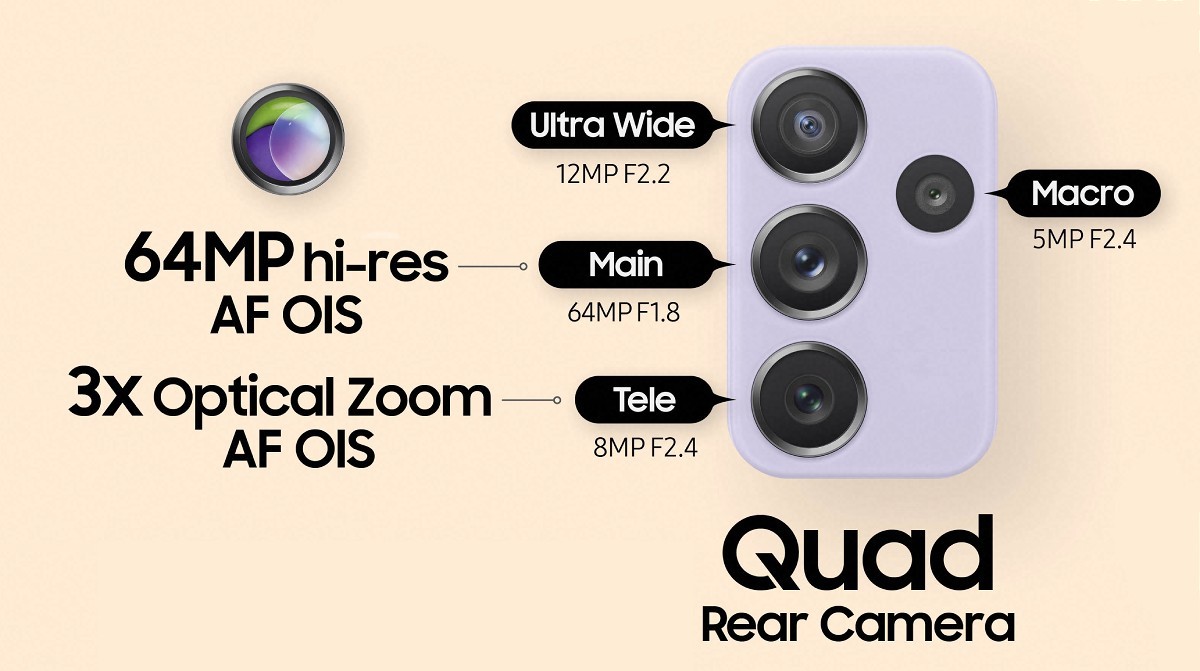 Both the Galaxy A52 and A72 will come with One UI 3.1 out of the box and will be receiving 4 years of security update and 3 major OS updates, like other Samsung phones.

The Samsung Galaxy A52 and Galaxy A72 will be available in Nepal through retailers and brand shops soon.