Samsung Galaxy Note 9 Long-Term Review – Irresistible
Galaxy Note 9; the flagship phablet by Samsung this year. A flagship by Samsung, what does that mean? Well, the answer is as always great. There are a couple of changes that are pretty significant and add up to the overall user experience. Let’s dive deep into this and check out the potentials of the Samsung Galaxy Note 9 that we managed to unleash during our period of usage.

Right off the bat, the Samsung Galaxy Note 9 looks a lot like its predecessor: the Galaxy Note 8 which is not bad at all, as the design of the Note 8 still manages to stack up against other devices in 2018. It has a glass sandwich design and the look and feel are great. The only difference in terms of design is the location of the fingerprint scanner which is now placed in a much convenient location. Though placed in a convenient location than before, the people with small hands will still find it hardly reachable.

The Note 9 is a little bit shorter, a little bit wider and a tad bit heavier than its predecessor, the Samsung Galaxy Note 8. Despite being shorter than the Note 8, the Note 9 houses a 6.4-inch Super AMOLED panel on the front with QHD resolution, an 18.5:9 aspect ratio which provides it with 83.4% screen to body ratio and a whopping 516ppi pixel density that also happens to be HDR 10 compliant.

Undoubtedly, Samsung is the best in class when it comes to Smartphone displays and the AMOLED panel on the Note 9 with all its glory happens to be the most beautiful display on any smartphone. Provided the 1000nits brightness, even outdoor visibility is not an issue plus you get all the goodness of the AMOLED panel i.e. rich colors, deep black levels, and excellent viewing panels. There’s no notch obstructing your view so all you get is pure and crisp display. Notch haters can be happy about that. 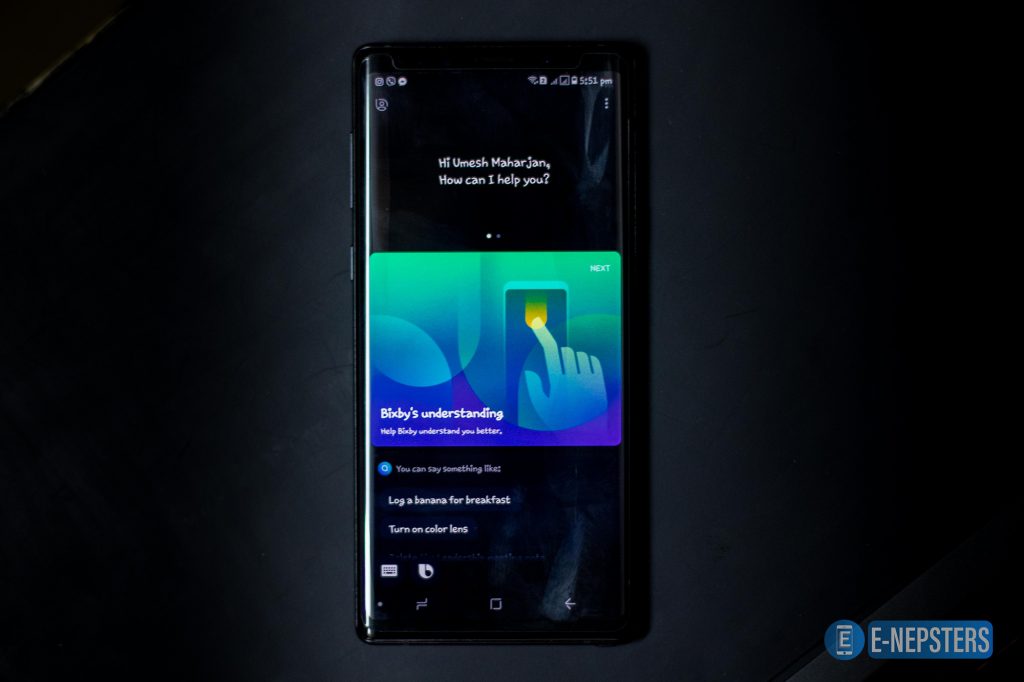 Over at the software front, the Galaxy Note 9 runs on Android 8.1 Oreo. There’s Samsung Experience UI which is Samsung’s custom skin built on top of Android 8.1, the UI by no means is lite but it is optimized as fast as a flagship can get. No matter what you do on this phone, the UI doesn’t tend to lag, which was noticeable with earlier generations. Plus the fact that it is a custom skin, you get a whole lot of features like Smart Lock, Quick Launch apps, etc. Plus it’s the UI that makes the S Pen truly a utility. To sum it all up, the software holds up pretty good even after one month.

Now let’s talk about the crown jewel of the device, the cameras. The Samsung Galaxy Note 9 uses an identical camera setup to that found on the Galaxy S9 Plus, which is by no means a slouch. On the rear, the Note 9 houses a 12+12MP dual camera combo with a primary wide angle lens and the ability to switch apertures between f/1.5 and f/2.4, followed by a secondary 12MP telephoto lens with a f/2.4 aperture to give you that 2x lossless zoom.

The cameras with the inclusion of AI or scene optimization as Samsung likes to call it handles every scenario like a champ. When it comes to daylight shots the pictures turn out to be great, have a great number of details and the best part is that there’s zero shutter lag. Dual cameras ensure great portrait images with the adjustable background blur option before and after you click a photo with that Live Focus mode. As for the low light shots, the OIS and f/1.5 aperture along with awesome software processing, the camera does a great job and captures some great images with a ton of details and low noise levels.

Moving on to video, the Galaxy Note 9 can shoot 4K at 60 fps and with OIS the videos turn out to be smooth and detailed. There’s Super Slo-Mo which captures 720p at 960 fps. Over at the front, there’s an 8MP f/1.7 lens which clicks some great selfies and features like dual video call and Auto-HDR is just icing on the cake. The front camera too can shoot videos at 1440p. And yeah there’s AR emoji, to say the least, it still needs some improvements.

Plus Samsung has included flaw detection that prompts you if it detects any flaw, like blurriness, red-eye, etc. so that you can immediately capture another one before a moment is missed. There’s a full-fledged pro mode which means if you’re someone who is into photography, the Note 9 won’t disappoint you.

If you’re someone who doesn’t like to stun others with that great audio, you can never go wrong with the 3.5 mm headphone jack, or can you?

Hopping on to the security, with the Note 9 Samsung has still kept the biometric security i.e. the Iris Scanner. How can we forget the weird placement of fingerprint scanner on previous devices like the S8 and S8 Plus; and the Note 8. Finally, on the Note 9, it has been shifted below the camera and is as always fast and accurate. The fingerprint setup is so quick that it just needs you to swipe your finger down the sensor and it’s done within a second. Being a 2018 flagship, it also supports face unlock and the old school, pin, pattern, etc. Smart unlock is present which combines the face unlocking with the Iris Scanner.

Talking about performance, which always has been the standout feature of the Note lineup. Note series has always been known for their excellent performance and with the latest and greatest Samsung’s own in-house chip, the Exynos 9810, it makes the Note 9 even better. No matter what you throw at it, the Note 9 will never break a sweat. Every aspect of performance on this device whether it be opening up apps, running multiple apps in the background, gaming and what not is what gives you the flagship grade experience.

With that mighty S Pen, the Galaxy Note 9 is not only about performance, it’s also about the utilities that it brings along. With the S Pen being powered by Bluetooth LE, the Note 9 has just unleashed the beast. With a great hardware and an optimized software, the S Pen adds to the utilitarian aspect of the phone, from taking notes to capturing images, controlling media and even changing slides when connected to external monitors, which this time around just requires a USB type-C to HDMI converter, the possibilities are endless. For more, do check out our full review of the S Pen.

The Gaming front is handled by Mali G72 MP18 GPU inside. With the debut of Fortnite to the Android platform exclusively with the Note 9, do I really have to say anything? No matter what games you play, the Note 9 will run it like a champ. The display and sound being immersive, you’ll be indulged in gaming. During gaming sessions, the device tends to get warm. Though Samsung tells us that there’s liquid carbon cooling technology on this one, this was not seen in action.

Battery, the aspect that used to be the forte of Note series slowly faded away and we all know the reason. This year, the Note 9 changes that with the 4,000mAh battery running this powerhouse. With this massive battery, you don’t have to worry about your phone dying before you go to bed. Plus if you need a quick top-up, both fast charging and fast wireless charging is supported.

Talking about charging, the device takes just 1hr 45 minutes to go from 0 to 100% which is impressive considering the mammoth battery it packs in. During my usage, the only time required to plug in the device halfway through the day is while gaming because titles like PUBG consume battery quite easily. Else, the idle battery drain is minimal.

If you are a power user and you have been looking for a device that checks all the boxes of a perfect smartphone and price is not an issue for you, you can never go wrong with the Samsung Galaxy Note 9. TL;DR, the near perfect smartphone is the Note 9, just buy it.